Cholesteatoma is one of the most serious conditions affecting the ear. It can present in a number of ways.

The commonest symptoms are :

If left untreated it can grow and cause some serious complications as described below. Sometimes one of these problems may be the first problem the patient has.

What is a CHOLESTEATOMA?

It is NOT a cancer and has nothing to do with cancer. The word is pronounced: col-est-ee-at-oh-ma. It’s all about skin collecting in the wrong place.

The word is pronounced: col-est-ee-at-oh-ma.

A better name would be a ‘keratoma’ which suggests a swelling or collection of ‘keratin’. Keratin is SKIN – and this disease is all about SKIN – as discussed below.

The medical names for many benign and malignant tumours end in ‘-oma’.

THIS CONDITION IS NOT A TUMOUR NOR IS IT IN ANY WAY RELATED TO CANCER.

So what is a cholesteatoma?

A cholesteatoma is where part of the ear drum becomes sucked inwards into the middle ear space and then into the mastoid bone.

As the ear drum becomes sucked inwards it drapes over the hearing bones and over other important structures in the ear. With time these structures may be worn away and damaged.

The skin which collects in the ‘sac’ formed by the collapsed ear drum can easily become infected causing a very smelly discharge to leak out of the ear.

1. A normal ear canal with the ear drum(in red) in a normal position. The 3 hearing bones are in the middle ear space behind the ear drum 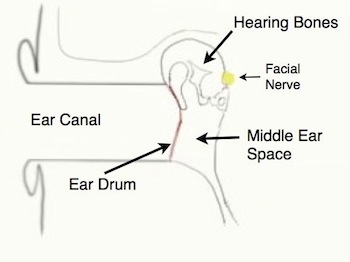 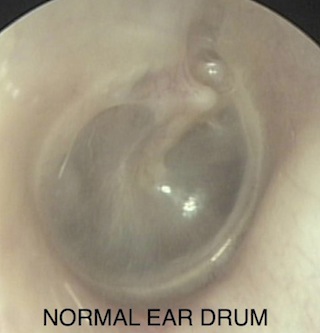 2. The ear drum is being sucked inwards and is draping over the middle hearing bone 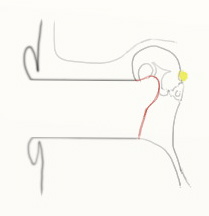 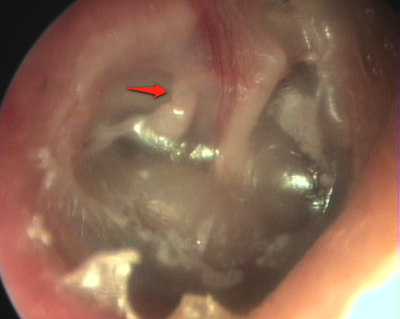 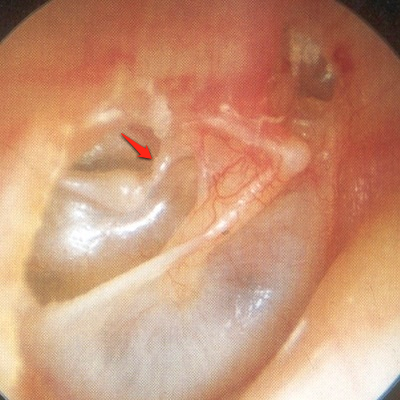 The ear drum has worn away a lot of the middle hearing bone. 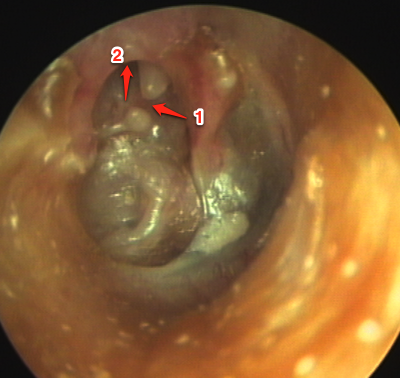 The ear drum has dropped further in and has worn through the middle hearing bone (arrow 1) and is now lying against the inner wall of the middle ear space. This RETRACTION POCKET is still cleaning itself BUT the extent of the pocket can not be seen. It is disappearing out of view (arrow2) so skin may be collecting deeper in the ear.

. The ear drum has dropped in further and has worn away the middle hearing bone. It is lying on the facial nerve. The ‘sac’ has filled with shed skin. This is a cholesteatoma. The sac may be extending back into the hollow mastoid bone. 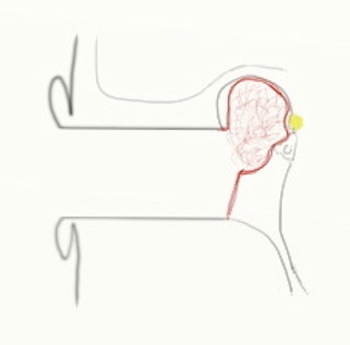 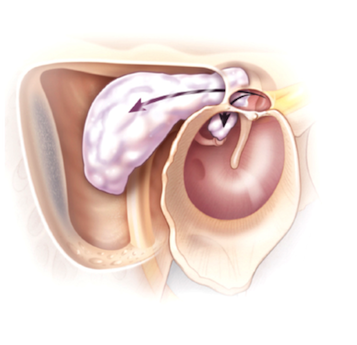 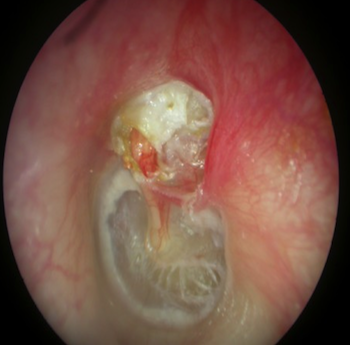 What causes a cholesteatoma?

A cholsetaetoma is thought to occur due to a combination of factors:
1. A poorly functioning Eustachian tube
2. A failure of skin migration

Behind the ear drum is an air filled space called the ‘middle ear’. The hearing bones are suspended in this space.

The middle ear space is joined to the back of the nose by a tube called the Eustachian Tube.

This tube is normally closed sealing the middle ear off from the outside world.

However every time you swallow or yawn the tube opens allowing air to go up the tube into the middle ear space. 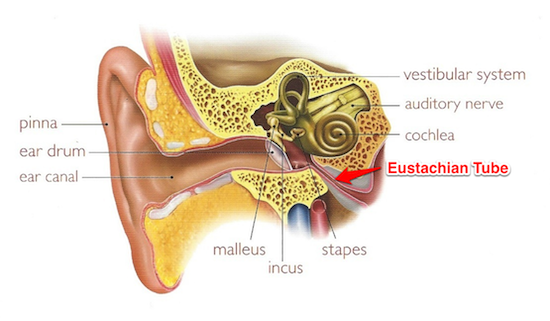 If you take air out of a sealed space then a negative pressure will develop within that space.

The negative pressure will cause the walls of that space to collapse. However in the middle ear all the walls of the space are solid bone – apart from the ear drum.

Over time the negative pressure, which has developed in the middle ear because the Eustachian tube has not been opening properly, will weaken the ear drum and eventually suck it inwards.

The longer this goes on the further in the ear drum will be sucked.

The bone behind your ear is called your mastoid bone and it is usually hollow.

The mastoid bone opens into the back of the middle ear space.

These diagrams are as if you have sliced the top of the head off and you are looking down from above: 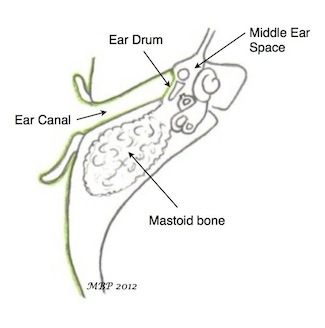 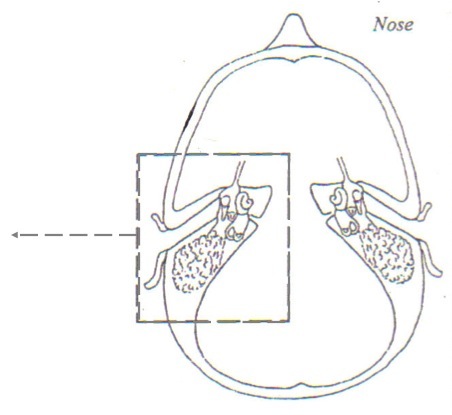 Over time the collapsed ear drum can be sucked back into the hollow mastoid bone taking with it the skin which was on the surface of the ear drum and is now forming the lining of this newly formed ‘sac’. 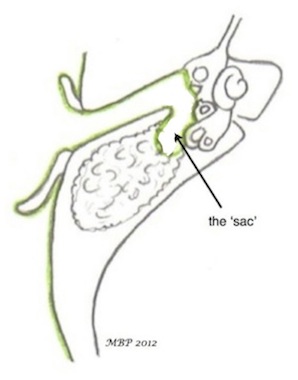 The skin continues to grow and shed and collects within the sac inside the mastoid bone.

This is a cholesteatoma. 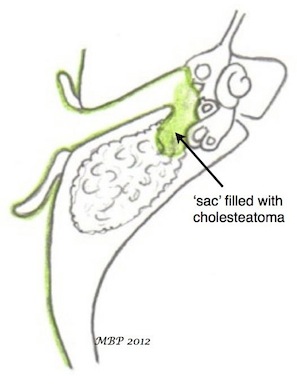 The skin covering your body is continually growing. The skin is 5 layers thick. New skin cells start in the deep layer and work their way up to the surface where they are rubbed of by friction.

The ear canal and ear drum are covered with skin but down the ear canal there is no friction so the skin grows in a different way.

In a cholesteatoma this property of skin movement fails and instead of the skin moving along the surface of the ear drum the skin builds up in the retraction pocket or ‘sac’ and starts to form layers of dead skin.

The ‘sac’ which is forming fills with this skin and is prone to getting infected. Once infected the patient can experience ear discharge with a very unpleasant smell.

What are the risks of a cholesteatoma?

If left untreated a cholesteatoma can cause damage to the important sturctures in and around the ear. Two features of the cholesteatoma are resonsible for this damage.
1. Bone Erosion
2. Infection.

As the collapsing ear drum is sucked back into the middle ear and mastoid the sac which is created drapes over the various bony structures. With time the bone can be worn away and the structures underneath can be damaged resulting in the following problems:

Deafness
If the hearing bone is worn away the ear drum is no longer attached to the inner ear so sound does not get through to the cochlea so the hearing drops.

Facial Nerve Palsy
The facial nerve lies in a bony canal on the inner wall of the middle ear space. If this bone is worn away the nerve is exposed and is vulnerable to damage from infection or pressure. Damage to the nerve can cause a weakness or loss of movement on one side of the face.

Dizziness
Part of the balance organ bulges into the channel between the middle ear space and the mastoid bone. If this bony covering is worn away then the balance system can be damaged causing dizziness and possible total loss of hearing which can not be repaired (dead ear).

Tinnitus
Anything which affects the hearing mechanism or the inner ear can cause tinnitus.

Taste disturbance
The nerve supplying taste to the front 2/3 of the tongue runs just under the ear drum and through the middle ear. Damage to this nerve from the cholesteatoma may cause a strange taste sensation although this is not common.

Meningitis / Brain Abscess
The middle ear and mastoid are situated within a bone which extends deep into the head and separates them from the surrounding brain. The cholesteatoma sac can wear away this bone and expose the ‘dura’ which a thick lining covering the brain. If infection gets through this layer then there is a risk of meningitis or brain abscess.

Smelly ear discharge
This is often the symptom that will bring the patient to the doctor. A recurring discharge with a very unpleasant smell. The ‘dead’ skin within the ‘sac’ becomes infected and can be very difficult to treat because ear drops can not reach the deep parts of the sac and there is no blood supply to take in antibiotics.

Can cholesteatoma be cured?

Sometimes cholesteatoma can be cured. In other words we remove the disease and there are no further problems.

HOWEVER cholesteatoma not infrequently reflects a chronic underlying problem with the way the ear works and follow up for many years with occasional further treatment of the ear maybe required because at the present time the underlying pressure control mechanisms of the middle ear can not be fixed.

IT MUST BE STRESSED THAT THESE ARE VERY GENERAL PRINCIPLES.

EVERYONE IS DIFFERENT AND THERE ARE MANY VARIATIONS ON WHAT IS DESCRIBED HERE.

EACH PATIENT SHOULD BE TREATED AS AN INDIVIDUAL.

THE APPROPRIATE TECHNIQUE OR COMBINATION OF TECHNIQUES SHOULD BE CHOSEN DEPENDING ON A PATIENTS INDIVIDUAL CIRCUMSTANCES AND THE WIDE VARIETY OF FACTORS WHICH INFLUENCE THAT PATIENTS TREATMENT.

IF YOU ARE NOT ONE OF MY PATIENTS I AM SURE YOUR SURGEON WILL DISCUSS HIS PRACTICE WITH YOU IN DETAIL.

PLEASE DO NOT BASE TREATMENT DECISIONS ON THE CONTENTS OF THIS WEBSITE. TALK TO YOUR DOCTOR. 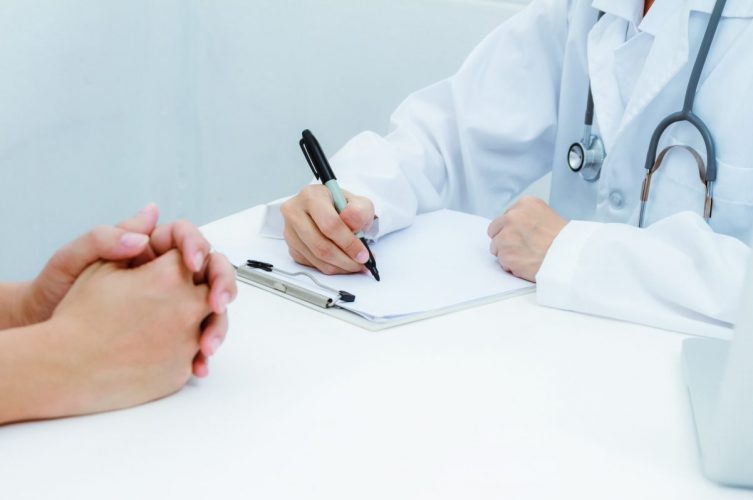 There are many different ways to operate to remove a cholesteatoma and your surgeon will discuss his... Read More

For more information on Ears and Hearing UK...